Share a memory
Obituary & Services
Tribute Wall
Read more about the life story of Roland "Lars" and share your memory.

Roland Herman “Lars” Larson was born on October 24, 1926 to Herman and Elsie (Robison) Larson in Parkers Prairie, Minnesota. He attended Parkers Prairie High School, graduating with the class of 1944. Lars enlisted in the United States Navy, honorably serving his country until his discharge in 1946. Following his discharge, Lars attended barber school, and worked as a barber for a few years. He then went to school to become a State Patrol Officer.

On April 1, 1951 Lars was united in marriage to Gloria Borchert. Their marriage was blessed with four daughters: Laurie, Lynne, Barb and Patty. Lars served as a State Patrol Officer for the State of Minnesota. He retired from the patrol after 30 years. That allowed time to enjoy his real passion of cattle and crop farming. Later to lease his land, while still enjoying the farm for gardening and hunting.

To send flowers to the family or plant a tree in memory of Roland "Lars" Larson, please visit our floral store. 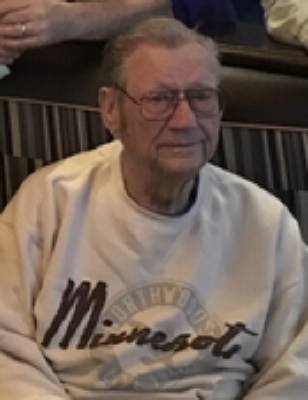